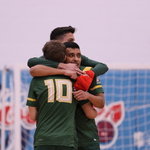 CMU Closes Out the MCAC Season with a Final Championships Appearance

The MCAC wrapped up its final Championship weekend on Sunday with the Copa de la Paz Futsal trophies awarded at host Universite de Saint-Boniface after a full day of semi-finals and finals action.  Blazers men's futsal contended for the cup and a chance to defend their 2020 title, but fell short in the final, relinquishing the championship to the Brandon Bobcats.