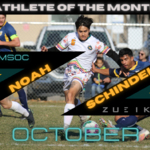 Congratulations to Noah Schindel of Men's Soccer on being selected the CMU Zueike Male Athlete of the Month for October. The rookie defender has been a fixture at the Blazers backline throughout the season, and the league has noticed. Big Weekend for Blazers Soccer as the Drive for Playoffs Continues

Last weekend's soccer matchup with the ACC Cougars may have been billed as a CCAA marquee matchup, but this Sunday's rematch on Assiniboine's home turf proved to be the real climax of the season thus far, and a potential turning point as the men's and women's team make a drive for playoff positioning. 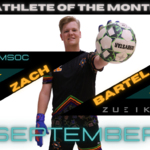 Congratulations to Zach Bartel of Men's Soccer on being selected the CMU Zueike Male Athlete of the Month for September. The second year goalkeeper has seen a lot of action throughout the first month of the MCAC season and has grown immensely as a player since his debut last year.