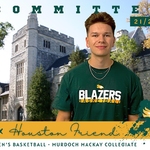 Houston has landed at CMU

CMU Men's Basketball is very happy to announce the commitment of Murdoch MacKay's Houston Friend for the 2021-22 NIAC and MCAC seasons. The versatile 6'2" guard and wing comes to CMU with a maturity and hard-working attitude that will serve him well on the team helmed by head coach Scott Martin.