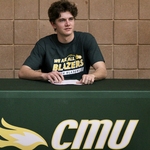 The CMU Men's Basketball program is very pleased to announce the commitment of Derek Neufeld for the 2022-23 MCAC and NIAC seasons. The Walter W. Brown product joins new teammate Daniel Cameron as the second Saskatchewan player to sign on with Blazers men's basketball this spring. The CMU Men's Basketball program is very pleased to announce the commitment of Daniel Cameron for the 2022-23 MCAC and NIAC seasons. The Dr Martin Leboldus High product comes to CMU with quality experiences at the club and high school level in Saskatchewan.