Slow Start to September has the Blazers Chasing for Playoff Positioning 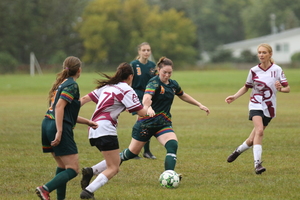 It has been a September to forget on most accounts for the Blazers as both the women's and men's soccer squads have struggled coming out of the gate.  A road-heavy start to the season that has seen the teams play only one match at the Ralph, along with one home match at Sturgeon Road Field which has certainly factored into the slow start.

Both teams will be on the road once more this coming weekend in Brandon, which will mark the halfway point of the season, and will end a string of four games away from the Ralph Cantafio Soccer Complex, before the Blazers will enjoy a three-game homestand to start the second half of the season.

A talented rookie class on the women's team has shown flashes of brilliance, but have yet to break out offensively, with the team's only tallies coming in their lone win over the Assiniboine Community College Cougars.  Returnees Ayesha Umar and Chloe Boulet scored the markers in that game, with veterans Julia Ignagni and captain Tiegan Kroeker putting in consistent performances in the middle of the pitch.  Though she has yet to record a clean sheet this season, rookie goalkeeper Juliana Marucci has been sensational on the back end playing through an MCL tear thanks to some creative work by the Blazers' athletic therapy team.

This weekend's matchup will be the first meeting of the season with the Brandon Bobcats, who sit second in the table on the women's side, one spot below last year's champions St Boniface Rouges who have yet to drop points in a match, and above the Providence Pilots, who the Blazers met this past weekend.  This last weekend's matchup was a classic tightly contested affair between the rival schools, with the game still knotted at zeros well into the second half before the Pilots had the tide swing their way and netted two to take the game.  The Blazers will meet the Pilots once more before the season ends, this time on home turf where the green and gold should have a full lineup at their disposal and home field advantage.

On the men's side, the Blazers will be in for another tough matchup this weekend when they meet last year's champs, and the current table-topping team, the Brandon Bobcats.  Like the Blazer women, the men have struggled to find the back of the net thus far, with only three tallies coming off of the boots of returnees Matheus Dos Anjos Aquino, Stan Pankiewicz and Gjok Prendi.  While the team has certainly had slow starts to the season in years past with the squad managing to peak come playoff time in late October, it seems as though a dogfight to simply enter the playoff picture may be in the works this season.  Perennial bottom-dwellers Assiniboine College Cougars managed to come away with a draw with the Blazers in their one matchup so far, and also took points off of the St Boniface Rouges, placing them above CMU in the rankings for the first time in recent memory.

Luckily, the team still has three games remaining against the two teams just above them in the standings, the aforementioned ACC Cougars, as well as the Providence Pilots, who will each meet the Blazers one more time at the Ralph as the green and gold fight to get back into playoff positioning.

This coming weekend also marks the first official matches for a Blazer team not taking to the turf, as the men's volleyball team jets off to the Vancouver area for exhibitions with Abbotsford's Columbia Bible College Bearcats, as well as North Vancouver's Capilano University Blues.  The defending MCAC Champions will look to challenge their PacWest opponents in CCAA cross-conference play, and pick up right where they left off as Manitoba's representative at CCAA Nationals last year in Quebec City.