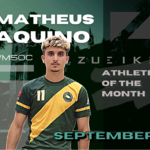 Rookie striker Matheus Aquino scored once in each half on Sunday afternoon, as CMU topped the Brandon Bobcats 2-1 to wrap up Week 1 MCAC men's soccer action.

The early stages of the match saw the visitors create most of the attacking chances while CMU absorbed the Bobcats' pressure. Brandon's best chance in the opening half came in the 11th minute on a volley from the foot of Diego Rodriguez. The former MCAC all-conference selection ran onto a lob pass at the edge of the 18-yard box and struck a dipping shot labelled for the top corner only to see his shot equalled by Blazers first-year goalkeeper, Brayden Abbott, at full stretch. 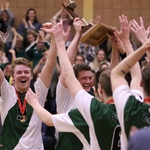