A recap of this past weekend's action 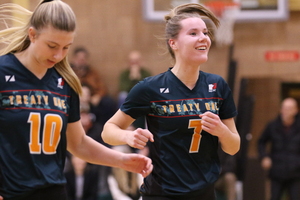 In their first home action since early December, the Blazers volleyball squads hosted Les Rouges at the Loewen as the CCAA marquee matchup for Manitoba and the green and gold didn't dissappoint.  Coming off a third place finish at the Niagara Knights Invitational in Southern Ontario, the Blazers men came out firing on all cylinders, taking the first set by a 25-15 scoreline, then the second 25-17 before a third and final tight 25-23 game that gave the Blazers the win.  CMU managed to spread the offence around throughout the match, but Duncan Petrie led all players with nine kills from the right side, and added a game-high three aces as well.

On the women's side, it looked to be a tough match on paper as the Blazers who sat in third in the conference before the match were up against a first-place St Boniface side and last season's champs that had only one previous loss on the season thus far.  The Blazers have done well recently against tough opponents, having taken their Durham Lords hosts the distance last weekend, the highest CCAA nationally-ranked team at the tournament.  So despite taking a 22-25 loss in the first set, there were still signs of good things to come later in the match.  A whopping 14 kills during the second set let the Blazers cruise to a 25-14 win and turned the tide of the match in their favour, as 25-22 and 25-21 set wins followed.  Both left sides Rachel Bartel and Layla Reichert hit double-digits in kills on the match, accounting for more than half the Blazers' total kills.  The huge win coupled with an ACC win on Saturday afternoon brings the Blazers into a tie with the Pilots for second place in the MCAC standings.

Meanwhile in the French Quarter, the Blazers basketball teams were also facing Les Rouges in their first league action of the second half.  The women's teams battled first, and the Blazers came out just as strongly as they left off in the first half, outpacing St Boniface to a 116-27 scoreline which holds as a new Blazers women's basketball scoring record.

The very competitive men's side of the conference has produced some very tight scorelines this season, so it was all hands on deck for the Blazers, as they fight for positioning in the standings.  CMU hasn't lost to St Boniface this season and the Blazer men were determined to keep it that way, earning the 96-62 win, which included a very dominant performance on the boards by rookie Daniel Cameron, who pulled down 29 rebounds and drained 26 points on the game.

Saturday's rematch was taken from the same script, as the CMU women once again came out to a Blazing start and didn't look back, as they stayed perfect in MCAC play this season, taking the game by a 90-17 scoreline.  Veteran guard Anna Pyne led the scoring for the Blazers with 20, followed closely by fellow guard Shirliz Apiyo with 19 of her own.  New addition Benigne Irakoze added 16 of her own off the bench, while forward Oluwanifemi Gbadamosi did her job on the boards, pulling in 10 rebounds to go along with 16 points for the double-double.

In the men's rematch, the Blazers came out of the gate slowly, but righted the ship after the first quarter to cruise to a 91-60 win on home court.  Daniel Cameron was once again strong in the second half of the back-to-back, adding 15 points and 11 rebounds for the double-double, to put his totals for the weekend up to 41 points and 40 rebounds.  Folio Player of the game George Fedorchuk led the Blazers in scoring with 21 off the bench including five of eight from downtown.  All thirteen dressed players saw time on the court, and with the team slowly getting back to full health things are looking up for the Blazers as they make a drive down the home stretch of the season.

In Western Manitoba, the MCAC Futsal season began as all five conference member teams start the chase for the Copa de la Paz.  CMU's matchups on the day were the Brandon Bobcats, hosts of the women's tournament this weekend, and the Assiniboine Cougars, hosts of the men's tournament.
In the first match at Assiniboine Community College, the Blazers met last year's champions, the Bobcats, and found themselves in tough as the the powerful Brandon side simply outpaced the scoring of the green and gold on this day.  Making his return to the Blazers, Kieran Baydock potted one of the three CMU goals, alongside outdoor soccer rookie all-star Noah Schindel, and Stan Pankiewicz to account for the 7-3 final scoreline.

Meanwhile at Brandon's Healthy Living Centre, the Blazer women were also in a tough matchup with the Bobcats, and although the score remained tantalizingly close for much of the match, CMU just couldn't muster the final push to close the gap late in the game, taking a 4-2 loss into the books.  The Blazers' Ayesha Umar and Julia Ignagni were the lone goal scorers for CMU in the match.

In the late afternoon game the Blazers found their footing in a big way, as the men's side put up a convincing 6-1 win over their hosts the Cougars, after several very close matches with them during the outdoor season.  All-Canadian Matheus Aquino scored three for his first goals of the campaign, while Pankiewicz and Baydock each added another to their season tally, with the final Blazer goal coming off the boot of Matthew Pahl.

The Blazer women also had their way with the Cougars, breaking out for six goals of their own including a hat-trick performance by second-year Kalyssa Wasylik, with Ignagni again showing her scoring touch, and Caleigh Peden and Kasey Petruskavich getting in on the action as well.  ACC managed only three goals in response, settling the final at 6-3 for the Blazers.

All six indoor teams are back in action this coming weekend with the basketball teams off to Bemidji for NIAC league play with the Oak Hills Wolfpack, while Blazers volleyball have a set with the Providence Pilots, and finally the second leg of the Copa de la Paz goes on Sunday, hosted by St Boniface and Providence.