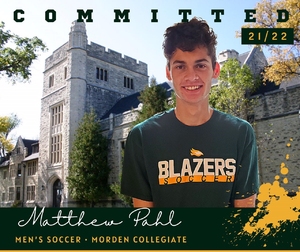 The CMU Blazers are pleased to announce the commitment of Morden Collegiate's, Matthew Pahl to the men's soccer program for the 2021 MCAC season.

Pahl has been a central figure in the success of his high school team throughout his career, beginning with a second-place finish in zone championships and a bronze medal performance in provincials as a Grade 10 player.

2019 would prove to be a big season for the Thunder. Morden topped all competition at the Garden Valley Collegiate tournament and Pahl's goal stood to be the championship-winner in a 3-1 defeat of Niverville in the tournament finale. He would also earn recognition as a tournament all-star.

Morden continued their strong run of form through their zone regular season, playoffs and carried their undefeated season into the 2019 provincial championships. Advancing to the finals, Morden boasted a combined record of 16 wins with 0 defeats, on the strength of 72 goals-scored while conceding only 10 times. Unfortunately for Pahl and his teammates, the one blemish that fell on their season came in the provincial final and a 1-0 loss to Minnedosa. Settling for silver and somewhat satisfied with a strong season, Pahl would receive recognition as the Player of the Game in Morden's zone championship victory.

Pahl's development has been a beneficiary of the growth and excellence of club soccer in his area through South Central Youth Soccer (SCYS). A member of the Pembina Valley Panthers since 2014, Pahl has had the opportunity to regularly compete against premier-level competition through the Winnipeg Youth Soccer Association (WYSA), competed in the 3x3 tournament that commemorated the inaugural season of Valour FC and the beginnings of the CPL in Winnipeg, and brought home some MVP hardware from the Golden Boy Tournament.

"Matthew comes to us with a solid playing resume. He has a history of playing on winning teams and if contributing to those team's wins," said CMU head coach Anderson Pereira. "This season has provided coaches with alot of recruiting challenges. It is hard to find an opportunity to see players play so we can assess their attributes. Through meetings with Matthew and hearing about him from his previous coaches, he has a really strong mentality, is intelligent and coachable and is going to impact our team in a positive way. I think he will take to the MCAC-level quickly and be an important player for us going forward."

There is plenty of momentum building in the MCAC for 2021 as the provincial conference prepares to send it's first Manitoba representative to a CCAA National Championship this November. The MCAC received it's approval to join the Canadian Collegiate Athletics Association in June 2018 and after two seasons as probationary members, the 2021-22 season marks the first official opportunity that CMU and the MCAC to participate as full members.

The 2021 CCAA Men's Soccer Nationals are scheduled to be kickoff this November in Medicine Hat, Alberta. The winners of Manitoba will challenge the championship winners of the PacWest (BC), ACAC (Alberta), OCAA (Ontario), RSEQ (Quebec) and ACAA (Atlantic) as well as the hosts, Medicine Hat Rattlers and one wild-card team for the right to raise the 2021 National Championships banner.