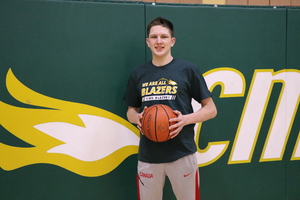 The CMU Men's Basketball program is very pleased to announce the commitment of Daniel Cameron for the 2022-23 MCAC and NIAC seasons. The Dr Martin Leboldus High product comes to CMU with quality experiences at the club and high school level in Saskatchewan.

Cameron will contribute an immediate impact to the CMU lineup next season adding more height and skill to the Blazer perimeter, standing 6'4" with the skillset of a talented point or shooting guard.

The Regina, Saskatchewan product currently plays for one of the top high schools in the Saskatchewan capital, with his Golden Suns competing at the top tier of high school sports in the province.  In his grade ten year the team was in a city championships run only to have the season cut short due to the first wave of the COVID-19 pandemic.  That season he earned himself most valuable player honours, as well as an All-Star nod at the Rochdale Invitational Tournament for his play during his last year at the junior varsity level.  His current grade 12 varsity squad came into the 10-team city championship tournament as the fifth seed, but were able to knock off the fourth-ranked team en route to a final-four appearance before eventually being bested by the eventual city championship winner.  The team went on to place third overall at the Saskatchewan Provincial High School Championships.

On the club side, Cameron has trained with Rise Above Basketball throughout high school, and was also a part of the Saskatchewan Provincial Team for his U15 and U16 seasons in 2018 and 2019.  It was in club that the Blazers' newest guard learned the skills and mindset for playing and contributing to a championship-calibre program, and finished his 2019 season at an incredible 23-0 record with his Rise Above team, winning the Swoosh Edmonton Tournament as well as two more tournaments in Vancouver along the way.

"Daniel Cameron is a high end recruit who should be ready to contribute right away," chimed in Blazers men's basketball head coach Scott Martin about his newest addition.  "He has played for quality club and high school teams with plenty of wins in his young career already.  His passing skills as a tall outside perimeter player will make him an immediate impact player for our program."

Cameron already has a connection with CMU through his sister who attends, and is excited to study at the Redekop School of Business on campus.  He is particularly looking forward to joining a great basketball program and hopefully being a part of future successes with the team!