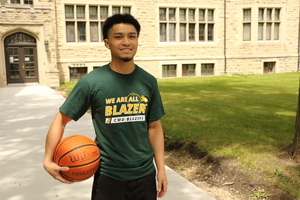 The CMU Men's Basketball program is very pleased to announce the commitment of Braeden Fernandez for the 2022-23 MCAC and NIAC seasons. The local Kelvin High product will bring a quick play-making ability to the Blazers backcourt when he joins the squad for the upcoming year.

A 2020 graduate from Kelvin High school, Fernandez has been keeping his skills sharp with Legacy Prep, where he was contacted by Blazers head coach Scott Martin after exhibitions with the CMU squad last season.  Fernandez marks the fifth signing of the offseason for Martin in a guard-heavy recruiting class.  The Blazers head coach is looking to fill the holes left by graduated star guard Seth McKenzie who received his diploma this past April, as well as the spot left open by the men's basketball most valuable player Isaiah Cole, who transferred to the University of Winnipeg Wesmen for the upcoming season.

The 5'7" point guard received quality coaching throughout his developmental years, including from Jay Mendez at Kelvin High, who also coached Fernandez during his later years with Winnipeg Alliance club.  His Kelvin Clippers high school teams were perrennial contenders at the MHSAA AAAA Provincial Championships, including winning a provincial title in his first year of junior varsity in 2017, when the team bested Garden City in the championship final.  Fernandez was awarded the Kelvin basketball player of the year award in both grade nine (2017) and grade ten (2018) when the team lost their quarter-final matchup and came as close to any other team to upsetting the Sturgeon Heights Huskies, who eventually went on to win the title that year.  The 2019 Provincial Championships brought stiff competition as well, when the team became quarter-finalists another time, once again losing out to the eventual tournament champions in the Vincent Massey Trojans.  In his final year of varsity basketball, Fernandez served as team captain and was recognized as an all star at the Brandon tournament that season, as well as an MHSAA Graduating All-Star.  But the 2019 Provincial tournament proved to be the last for Fernandez as the 2020 edition was abruptly cancelled due to COVID-19, leaving the graduating all-star without a final chance for a quest for the title.

The newest Blazer has been playing basketball for a long time, first with the Manitoba Magic while still in elementary school, and then under the training of his passionate father, who coached him during his early years with Winnipeg Alliance Club.  His later years at Alliance saw him receive year-round coaching from Jay Mendez, who also coached him during the high school season, and finally, Fernandez finished his club eligibility with the Southside Gladiators.  His years of club have allowed him to refine his game while playing against big-time competition in Manitoba where his Winnipeg Alliance team were Provincial Finalists, as well as south of the border at tournaments in Grand Forks, Fargo, Minneapolis, and beyond; experiences that will serve the new point guard well during the MCAC and NIAC seasons.

The Legacy prep signing got his first tastes of CMU basketball through exhibitions against the team during the last two years, and decided this year he was finally ready to start his university career.  Like his new teammate Marco Guaring, Fernandez will be studying business at CMU while not on the court with the green and gold, and has heard nothing but good things about the school.  His Legacy Prep head coach Marlin Kraus helped connect with Blazers head coach Scott Martin, who is excited about adding the shifty point guard to his lineup.  "Don't let Braeden's size fool you, he is a lightning quick play-making point guard who can also shoot threes," stated Martin about his most recent signing.  "He has received quality coaching at Kelvin from Jay Mendez, and from Marlin Kraus at Legacy Prep, and can bring an up tempo game to our team."