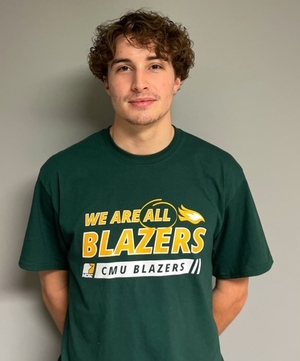 The CMU Men's Basketball program is very pleased to announce the commitment of Ethan Thacker for the 2022-23 MCAC and NIAC seasons. The Dauphin Regional Comprehensive product joins a strong recruiting class from West of Winnipeg.

A 2019 high school graduate, Thacker comes to CMU after a hiatus from competitive basketball, but has been keeping busy playing in the Manitoba Major Junior Football League (MMJFL) where his St Vital Mustangs won this past season's championship.  Thacker was also announced earlier this year as the league's top scorer over the previous season.

The Dauphin, Manitoba native played his high school ball with his home town DRCSS Clippers at the AAA level of MHSAA.  His time there saw him earn numerous personal accolades, including team MVP for all four of his high school years, as well as plenty of player of the game awards.  His skills on the court led to bigger leadership roles with the team, and was selected as team captain for his grade eleven and twelve seasons, culminating in a Provincials appearance, where the team won the consolation final in the top Manitoba tournament.  That same year Thacker had the opportunity to compete at the graduating all-star game, where he went on to win MVP.

The 6'3" point guard plays with an athleticism honed by playing multiple sports throughout his formative years.  In his lone season of club basketball during his grade twelve year, Thacker captained the Dauphin Hawks under his varsity high school coach Jon Marshall.  The experience helped him take his game to the next level by being able to compete against the best competition throughout Manitoba and Saskatchewan.

Ethan Thacker was the first player head coach Scott Martin ever tried to recruit, and is happy to finally have the athletic guard at CMU.  Martin pursued Thacker throughout his grade twelve club and high school seasons, and while he ultimately decided against post-secondary schooling at the time, it was always in the back of his mind about coming on board to reignite his basketball career with the Blazers, and coach Martin is confident that Thacker has the potential to become a very good player at the MCAC level.

"What excites me about playing at CMU is just getting back on the court and being able to play the game I love with a great group of guys under great coaching," states the Blazers' newest addition.  "After playing recreationally the last few years and playing football in the MMJFL in Winnipeg I've been excited about making a return to basketball as well."  For Thacker, having a few friends already attending CMU, the time was finally right to make his move and take his game to the university level.