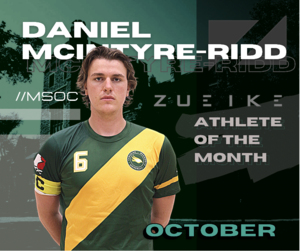 Since he joined the Blazers for his first season back in 2016, McIntyre-Ridd has been a stalwart of the CMU defence, challenging the opposition's top strikers game in and game out.  McIntyre-Ridd had himself another great season this year, captaining the team from the back line, an was particularly on point with his game during the month of October.  Early in the month he was pivotal in the Blazers full-time 0-0 draw with the top team in the standings, Providence Pilots, which was an omen of good things to come for CMU when the two sides matched up again weeks later in the MCAC Soccer Championships semi-finals.  McIntyre-Ridd added a goal in his final home match at the Ralph Cantafio Soccer Complex during a 12-1 blowout of the Assiniboine Community College Cougars.

McIntyre-Ridd saved his best performances of the season for last, as he took his game to another level in an attempt to take his Blazers to a Championship Final title.  "When we needed him the most on Championship weekend he stepped up and played one of the best games I have ever seen Daniel play in the MCAC in the semi-final against Providence," praised head coach Anderson Pereira regarding his captain's play.  "After a couple minutes into the second half I knew we would win that game because Daniel was determined to not let anything get past him.  Our team came together and played very well defensively and stayed very organized, a lot due to Daniel communicating and helping the team with his leadership on the pitch."  McIntyre-Ridd single-handedly turned away several grade-A scoring chances by the Pilots during their final push, but fate was on the side of the Blazers that day, as the team pulled off the only upset of the championships en route to a finals matchup with the hosts Bobcats.

Although the result was not what the team wanted, McIntyre-Ridd's ability to turn away waves of dangerous chances by Brandon in the final kept the Blazers' chances alive until late into the second half.  His strike from distance was perhaps the best offensive chance of the match for the green and gold, who could not manage to muster another thrilling upset to end their season.  His defensive play was recognized as he earned himself player of the game honours in his final outdoor match with CMU, and he will absolutely be missed next year.

The outdoor season has wrapped up, but the Blazers will return in January for the futsal season, which takes a new tournament format this season as seeding for championships occurs over two tournament weekends before finals take place at Universite de St-Boniface in early March.