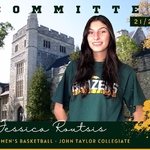 CMU Women's Basketball is very happy to announce the commitment of John Taylor Collegiate's Jessica Routsis for the 2021-22 NIAC and MCAC seasons.  The versatile 5'8 guard comes to CMU brimming with passion for the game made evident by her impact role as an underage player on her high school Pipers teams.