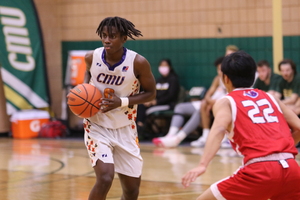 In the men's game the Blazers came out of the gate hot, putting up 23 points in the first quarter and in the process built up a comfortable lead that they were able to carry out to a 83-60 win.  The Blazers' Pacifique Jubilate was the high scorer for the home side with 21 points on the night, with Isaiah Cole adding 15 points of his own.  Scoring from the veterans was a theme for the men, as sharpshooter Binh Nguyen had a game-high two three-pointers and a total of eight points on the night in the CMU victory.

The back half of the home-and-home series took place in Winnipeg's French quarter at Universite de Saint-Boniface on Saturday night.  As with the night before the Blazers in green and gold took care of business over Les Rouges, once again allowing a rookie-heavy squad to eat up minutes in the 69-33 win.  First year guard Annika Goodbrandson was the points leader on the night with 18 for the Blazers, and helped keep the perfect season intact.

With home court advantage going to Les Rouges on Saturday night, the Blazers played to a much tighter 84-76 win over St Boniface, with much of the scoring load taken by second-year guard Isaiah Cole, who poured in 30 points to go along with nine rebounds, nine assists, and four steals.  Other notable standouts were veteran Seth McKenzie who added 20 points and five rebounds, as well as rookie big-man Jesse Fedak who scored 14 and scooped up seven rebounds in the win.  The Blazers sit atop the MCAC standings with a perfect 4-0 record through three weekends of play.

It was a full CMU and St Boniface matchup weekend, as the volleyball squads played out their home-and-home weekend opposite the basketball teams, beginning with an away match hosted by Les Rouges on Friday night.  Like their previous matchup on the season, the Blazers women started hot, winning the first two sets of the game in convincing fashion, but failed to closeout the game, dropping the next two tightly contested sets.  The Blazers managed to regain their early momentum and finally closed out the game with a 15-12 win in the fifth and final set, putting an end to Les Rouges' perfect season.

The men matchup up against a Les Rouges team that started the year winless in three matches, but one that was clearly heating up with a win over top dog Providence Pilots in MCAC volleyball week three action.  The completely home crowd buoyed their home side throughout the match, and left the Blazer men looking for a spark that was ultimately never found.  After a first-set win by Les Rouges, the Blazers responded with a win of their own, and the teams continued to trade sets, leaving the St Boniface side with the final set five win.

With the roles reversed on Saturday, the St Boniface women were looking for redemption at the home court of the Blazers, who once again went the distance in the five-set match.  Though the Blazers were able to sneak out a 28-26 victory in the opening set, the teams traded 25-19 set wins for the next three, leaving the game down to the final set once again, where a hot start by the Blazers was overcome and countered by Les Rouges, who ultimately took the final set and match.  Standouts for the home side were rookie left side Rachel Bartel, who scored 10 kills on the night, and added an absurd 25 digs on the defensive end as well as a stuff block.  The middle tandem of Chloe Friesen and Brooklyn De Jong were also effective, scoring eight and nine kills each, respectively.

Unlike the Blazer women, it was the Blazer men looking for redemption on Saturday night, and the rematch couldn't come soon enough.  With the offence in the hands of Tim Juvonen, the green and gold looked to rekindle their season opening magic; a straight sets win over the same St Boniface side.  Things were looking good for the Blazers after two close set wins, but Les Rouges responded with a win of their own in the third.  CMU regrouped for the fourth set in which they powered home their message that they weren't going to be denied a home win, taking the deciding set 25-16, and the match 3-1.  The Blazers' left side and right side duo of Cam Gayleard and Matthew Page each notched 12 kills in the four set win, with the most effective attacker on the night being rookie leaper Markus Martens, who added five kills and only two errors from the middle.

Next weekend sees the Blazers hit the road, as the volleyball squads play back-to-back days in Brandon, while the basketball teams head South to Niverville for Friday and Saturday games against the Providence Pilots in MCAC Week 12 games.