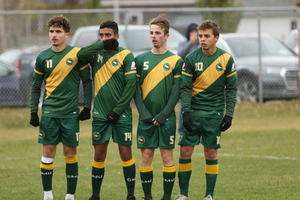 This year's editions of CMU soccer teams both entered the championship weekend as the fourth seeds, and heavy underdogs entering Saturday's semi-final matchups with top-seeded St Boniface Rouges on the women's side, and Providence Pilots in the men's division.

Blazers women's soccer looked good out of the gate, defending well against the strong St Boniface attack, and ended up heading into halftime down only one goal against the defending champions.  But the mometum shifted with the wind at the break, as the West wind which had aided Les Rouges in the first period, shifted to a cool North breeze and leveled the playing field for the duration of the match.  Waves of red strikers pounded the Blazers defence, and every CMU counter attack came up short.  The game eventually fell out of reach as St Boniface potted four second half goals en route to a win and a spot in Sunday's championship finals.

CMU's Tiegan Kroeker was named player of the match for the green and gold, and was joined by Ezri Trump in being honoured for their selection to the MCAC All-Star Team after the match.

Blazers men's soccer came into their semi-final matchup with the Providence Pilots confident in their ability to produce some magic, and they were not wrong.  A late first-half goal by CMU's Matheus Moreno ended up being the difference in the match, as an exceptional show of defence in the second half most notably by the Blazers back four defenders in conjunction with goalkeeper and eventual player of the match Braydon Abbott, turned away everything that the Providence Pilots threw at them.  The number one-seeded Pilots were stunned as the Blazers celebrated their upset win, earning themselves a chance at Glory in Sunday's championship final.

If the theme of Saturday's semi-final was patience and determination, Sunday's final had a theme of frustration as the Bobcats capitalized on some glorious early chances, aided by inconsistent officiating, that had the Blazers boiling on and off the pitch.  It was clear early on that nothing seemed to be going the way of the green and gold as the hosts Bobcats used every advantage to put the game out of reach, and headed into the half with a 3-0 lead.  Things looked bleak heading into the second half with the cold prairie wind now in their faces, and despite the obvious disadvantage the Blazers did not give up and managed to produce some of their best scoring chances of the game.  A final second half goal by the Bobcats was the back-breaker, and gave Brandon a 4-0 win at the final whistle and the opportunity to represent Manitoba at the CCAA Men's Soccer Championships in Calgary next week.

CMU's lone representative on the MCAC All-Star Team was rookie forward Matheus Aquino who led the MCAC in goals near the halfway point of the season.  The Blazers player of the match for the championship final was a well-deserving nod to the defensive talents of Daniel McIntyre-Ridd in his final match of outdoor soccer in the MCAC.