Big Weekend for Blazers Soccer as the Drive for Playoffs Continues 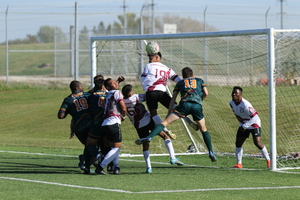 Last weekend's soccer matchup with the ACC Cougars may have been billed as a CCAA marquee matchup, but this Sunday's rematch on Assiniboine's home turf proved to be the real climax of the season thus far, and a potential turning point as the men's and women's team make a drive for playoff positioning.

Coming off a stretch of three games in only five days concluding last weekend, the Blazers had a well-deserved light weekend with only the one match scheduled on Sunday; a final meeting of the season with the Cougars that would prove to be the decider of the season series on the men's side.  Prior to kickoff the Blazers trailed the Cougars for the final playoff spot by one point on the table, with both previous meetings ending in draws that saw neither side able to break away and earn full points.  As in the standings, the Blazers trailed first in the game, with ACC's star Daniel Lopez scoring the first goal of what could only be described as a very hotly contested match, with several heated exchanges occurring throughout and after the final whistle.  Sophomore midfielder Micheal Ladell was able to draw the Blazers back even shortly before halftime.  With cards flying of all colours, CMU's Matheus Dos Anjos Aquino netted another for the Blazers pulling the green and gold ahead for good, giving them the essential full points on the day which allowed them to leapfrog the Cougars in the MCAC standings with only two games remaining.  Each team was awarded at least six cards through ninety minutes, including three reds to ACC, which could greatly affect their ability to pushback for points needed to catch the Blazers.

It wasn't a picture perfect outing for the Blazers women either, but a win regardless, which further distances them from the Cougars in the standings, who are now mathematically eliminated from playoff contention, and pulls them to within one point of the Brandon Bobcats for third in the table, a position which would afford the third-ranked team to avoid having to play the defending champions and powerhouse St Boniface Rouges in the first round.  Second-year midfielder Ayesha Umar scored in the first half for the Blazers from the penalty spot, and again from the spot in the second half, which was all the scoring needed to down the Cougars.  Rookie goalkeeper Juliana Marucci earned her third clean sheet of the season after recording one against ACC last weekend, and another against the Brandon Bobcats the weekend prior.  Every dressed player featured in the game for the CMU side, showing the team's depth while still maintaining a high-level of play needed to defeat a much-improved Assiniboine side over previous years' iterations.  With two games remaining, including one more against the Bobcats in another day trip out to Brandon next weekend, the Blazers' rankings heading into playoffs are still very much in their own hands.  The team has been quite successful over the Bobcats in two meetings so far this season, notching a tie last weekend, and a win the weekend prior, so the opportunity to vault over the Brandon side is still a very real possibility.

Meanwhile in Western Canada, Blazers women's volleyball played some pre-season matches with PACWEST opponents in the Vancouver area this weekend.  The schedule began with a low-key scrimmage with the Abbotsford-based Columbia Bible College Bearcats in which all thirteen athletes along saw playing time.  When the dust settled, the Blazers came away with a 3-2 win, taking sets two, four, and five.  An afternoon recuperating led up to the big evening matchup, which saw a few more of the Bearcats' starters see the floor, allowing them to dispense with the Blazers over four tightly contested sets.

Saturday afternoon's matchup with North Vancouver's Capilano University Blues also proved to be a very close matchup, with the Blazers eventually falling in five sets.  After coming out hot, the Blues fought back to take sets two and three, before the Blazers wrestled back the momentum from the home side to win set four.  A fantastic start by CMU in the fifth and deciding set was slowly whittled away by the Blues, who eventually took the set and the match on a marathon 20-18 win.

With the Blazers Soccer squads ramping up heading towards playoffs, many of the other Blazers squads are also ramping up heading into their seasons, with most teams having exhibitions scheduled in the coming weeks before league play starts in earnest in November.  MCAC Soccer Final Fours are scheduled to be hosted by Assiniboine Community College in Brandon October 29-30, the winners of which will earn a spot at CCAA Nationals in November.