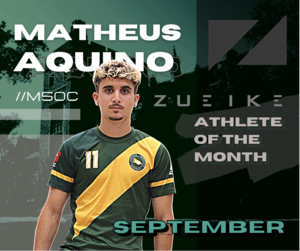 To date, Aquino has accounted for five of the Blazers 12 total goals, with those markers coming in bunches; first scoring two against the Brandon Bobcats in a huge home win, then a trio of tallies on the road against the Assiniboine Community College Cougars that helped earn CMU their second win of the season to stay in a playoff position.  That massive offensive output, along with the critical win over the team below them in the standings earned the star rookie Week 3 MCAC Male Athlete of the Week honours, as he sat atop the league leaderboard for goals at the end of September, despite the Blazers' struggles to create consistent scoring opportunities.

"Matheus has impressed us from day one he is a very skilled and hard working player," said head coach Anderson Pereira, who is midway through his fourth year leading the program. "We knew Matheus would be a great addition to our team since we recruited him in late August but we didn't expected him to be such a big part of our team on year one right from the start.  It usually takes some time for players to adapt to the league but Matheus was able to do it in no time. He has scored a lion's share of our goals this season and has been excellent in every game so far getting player of the match on several occasions."

Aquino also brings to the Blazers scoring threat a pace of play that can challenge the opposition's best defenders.  Not only can Matheus create scoring chances for himself, but his ability to get in behind the fullbacks to on through balls adds a dimension to the attack that keeps the other teams' defenders on their toes and opens opportunities for other players.  "We are really happy to have a player with his qualities and willingness to help the team and to improve more and more everyday.  He is also a great kid with an awesome personality; a natural leader that is always taking the first step on improving and helping others to do improve as well, which is a hard quality to find in players with such a young age," added Pereira about his young star.

The Blazers will require some more strong efforts from Matheus Aquino in October as him and his teammates are back in action tomorrow, beginning a heavy week that sees them at home on Wednesday night and Sunday afternoon at the Ralph Cantafio Soccer Complex, with a road game in Brandon to face the ACC Cougars slotted for Saturday afternoon.  The Blazers find themselves sitting in fourth place in the MCAC standings, and in a playoff position with six points, and have crucial matchups this week against the Cougars on Saturday, who sit immediately below them in the table, as well as with Les Rouges on Sunday, who hold the third place position in the standings.