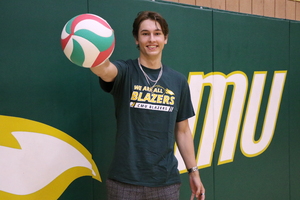 The CMU Men's Volleyball program is very pleased to announce the commitment of Seth Anderson for the 2022-23 MCAC season. The Dakota Collegiate and 204 Gold product rounds out a fantastic recruiting class for the defending MCAC Champions.

The jump to MCAC for Anderson will continue his family pedigree of collegiate athletes, as his mother Natalie played volleyball for the Wesmen at the University of Winnipeg, while his father Scott played basketball for the Wesmen under coach Joe DiCurzio, who now heads the women's basketball program here at CMU.

Coming from the strong Dakota Collegiate program, Anderson has already received some of the best coaching in the province and will bring a refined skill to the court, as well as plenty of leadership potential.  Primarily a left side for his high school Lancers, Anderson co-captained his team throughout high school and was named a Graduating All-Star at this year's MHSAA AAAA Provincials.  Coming into this year's tournament as the 5th ranked team in Manitoba, his Lancers had a difficult draw meeting the 4th seeded Steinbach Regional Sabres in the quarter-finals, which Anderson's team lost in a back-and-forth five-set marathon to end their provincials run.  In his previous provincials experience at the junior varsity level during his grade ten year, his team broke their 6th place seeding and managed a top-four finish, upsetting the 3rd-ranked St Paul's Crusaders en route to their semi-final appearance.  Anderson has been referred to as the "best attacker on the team" by his high school coaches, and nearly got to display that offensive talent on a planned Lancers volleyball trip to Cuba during his grade 11 year, but unfortunately the trip and the season eventually got cancelled due to the COVID-19 pandemic.

The 204 Club Gold squad has proved to be a hotbed for Blazers talent of late, and this year head coach Don Dulder has signed Anderson as part of a dynamic duo with Mika Feilberg who also played his club volleyball with the top 204 Gold team this past season.  Anderson will also be familiar with new teammate Fabio Ferreira who played his club ball with 204 Cardinal, and in fact, all five of Dulder's recruits this season have 204 Club connections, with Albert Francisco and Adrian Bernardo also featuring on 204 Club teams in previous years.  Anderson has played with 204 Gold since he started in club volleyball at 14U, and has had some notable finishes at Volleyball Canada Nationals, including 5th place in tier two during his 16U season, as well as an identical 13th overall placement of 77 teams at this year's championships in Edmonton.  Anderson put his well-rounded game to the test for his club, primarily playing left side, but also making appearances at right side and middle during his time with 204 Gold.

Anderson is excited about the direction the MCAC is going with the recent addition of CCAA affiliation, and can't wait to see what heights the level of competition can get to this season.  the 6'3" attacker was first connected to CMU through his junior varsity coach Jeremy Stubler, and Blazers head coach Don Dulder couldn't be more thrilled that he was able to land the local talent to round out his recruiting class, stating "Seth is a quality attacker and passer who I believe can have an immediate impact on our team.  He is another versatile athlete who can play left side or right side, has excellent leadership qualities, and gives us very good depth at our pin positions, not to mention he also comes from a very athletic family."  Anderson will look to take care of business on the court as well as off it, as he will be studying at CMU's Redekop School of Business while not on the court with his new Blazers teammates.

This past March CMU became the first ever representatives of Manitoba and the MCAC in men's volleyball at the Canadian Collegiate Athletic Association National Championship, and will look to build on their successes at home to bring their game to the national stage again in 2023.  The 2022-23 MCAC season is set to begin in late October, after the team heads West to Columbia Bible College in Abbotsford, and Capilano University in North Vancouver where they will see PacWest competition in early October.