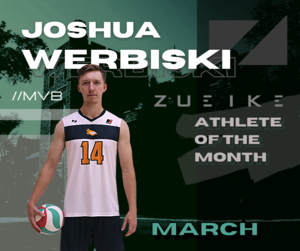 Congratulations to Joshua Werbiski of Men's Volleyball on being selected the CMU Zueike Male Athlete of the Month for March. The second year middle played a huge part in his Blazers' successful MCAC Championship defense, and led the team to represent Manitoba for the first time at the Canadian Collegiate Athletic Association National Championships in Quebec City.

Playing in his hometown of Brandon, Manitoba, Werbiski was an absolute force for the Blazers throughout their MCAC Championship weekend, leading the team in kills in both their semi-final win over the St Boniface Rouges, as well as in the final over the Providence Pilots, which earned the green and gold their second consecutive MCAC title.

The three-set semi-final win over Les Rouges saw Werbiski notch eight kills and no errors for an absurdly high 0.615 kill efficiency rating for the match, both team highs.  He also added two of the team's 11 stuff blocks in the match, and was a key factor in slowing down the outside threats of the St Boniface side.  The following day's final match with the Providence Pilots saw CMU's outsides struggle to find their rhythm, but CMU's middles filled the void with Werbiski once again leading the team with 11 kills and another fantastic kill efficiency rating of 0.588.  He earned himself another two stuff blocks in the win, along with 12 block touches, extending rallies and allowing the Blazers to turn their defence into offence.

Following their exciting MCAC win, the Blazers had only two-and-a-half weeks before boarding a flight to Quebec City for the CCAA Nationals where they would see themselves facing the top college teams in the country.  Despite facing the top-ranked team at the tournament in their first match, Werbiski and the Blazers did their best to shut down the Humber Hawks, which included utilizing CMU's middle threat as much as possible to keep the Ontario giants on their toes.  In their second match, the Blazers had to deal with a strong middle presence from the Alberta champs and eventual bronze medalists Red Deer Kings, who proved too good for the green and gold on that day, ending CMU's tournament, but not without taking away valuable experiences that will help the team prepare for next season.

Head coach Don Dulder couldn't agree more about the selection stating "I feel Josh has had a tremendous season in which he has not been recognized as much as he might have been.  I feel he could have been a conference all-star and possibly even MVP of the (MCAC) conference playoffs."

All this would be high praise for any player; however, the fact that Werbiski transitioned to a starting middle role from his spot as a backup right side in his first season with the Blazers in 2019-20 is not to be taken lightly.  "Josh is the ultimate team player.  Being asked at the beginning of the season to switch from the right side to the middle, he had no problem doing this for the benefit of the team," continued coach Dulder.  "He embraced the position and never once asked to be moved back to the right side, doing what was best for the team.  He now is clearly one of, if not the best middle in the conference.  Josh has also worked very hard in practice to improve his blocking and reading skills, as well as off the court to become stronger, and both have reflected in his play.  The best thing of all is that he is back next year and with his work ethic will no doubt come back stronger and better."

Fresh off the first ever appearance for CMU at a CCAA National Championship, and as the first representatives of Manitoba in men's volleyball, the team heads into the off-season with high hopes for getting back to the national stage next season.  The 2022-23 MCAC season will startup in autumn, but not before the team heads to Abbotsford, BC for exhibitions with some Western Canadian opponents in late September.