From a Flame to the Blazers: Women's Volleyball Adds More Fire to their Lineup 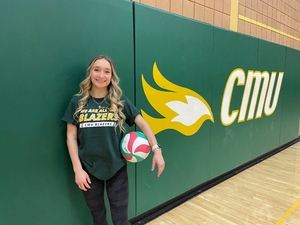 The CMU Women's Volleyball program is very pleased to announce the commitment of Ava Skromeda for the 2022-23 MCAC season. The St Mary's Academy product comes to CMU with plenty of experience at the club and high school varsity levels in Manitoba.

The 5'3" libero will look to lockdown the defensive side of play for the Blazers this season, and hopes to fill the shoes of Lydawn McGarry, the team's longtime defensive specialist who graduated this past April.  Skromeda will join current Blazers' libero Lauren Ens in creating a potential defensive duo in the Blazers' backcourt, now that the MCAC has adopted the two libero rule.  The new rule allows two defensive specialists to interchange during a set, so long as only one libero is ever on the court at the same time, allowing teams to dress and play multiple liberos throughout a match.

Skromeda comes to CMU from St Mary's Academy, a consistent powerhouse in AAAA volleyball in Manitoba, and thus brings with her plenty of big-game experience.  Her Flames placed second in this past season's MHSAA Provincial Championships, defeating the hosts Sturgeon Heights Collegiate en route to the finals.  Her play in their playoff run earned Skromeda Provincial All-Star recognition to go along with her Graduating All-Star Award and an honourable mention in the annual MHSAA Top Ten player rankings.

On the club side, Skromeda first suited up for Winman Volleyball Club, but is now playing with Bandits Volleyball Club on their 18U squad, alongside Abby Cassidy, who will be joining Skromeda in Blazers green and gold in the fall.  Their team placed third in the Brandon tournament this season, and finished fifth at Provincials in May before heading to Edmonton to compete at the Volleyball Canada Nationals.

Knowing her high school varsity and club career would soon be coming to an end, Skromeda looked to take her volleyball career to the next level and got in touch with Blazers head coach Jayme Menzies, having heard great things about the coach and Canadian Mennonite University.  Menzies was elated to add more top-end talent to her squad, noting "Ava brings determination, work ethic, and passion to the court, coupled with exceptional foot speed and an ability to read on defence.  Just having Ava in the gym will push the calibre of the entire team's first and second contacts."  Skromeda looks to be a great fit for the school, with her family close by to support her, and a new family of Blazers teammates ready to welcome her to the squad.

Full training for the team is set to resume at the start of September, and the team will dive headlong into preparations for non-conference exhibitions with the Columbia Bearcats and Capilano Blues in the Vancouver area in mid-October before league matches begin later in the month.  Having just finished their first full year of Canadian Collegiate Athletics Association (CCAA) participation, the Blazers will look to improve on their MCAC playoff finals appearance this March and push for a Manitoba championship when the new season begins in October.  The winner of the MCAC championship goes on to compete at a national level at the CCAA championship tournament. The CCAA is the national body for collegiate athletics in Canada, offering 10 national championships in seven sports. The Manitoba Colleges Athletic Conference joins five other established CCAA conferences; PacWest (BC), ACAC (Alberta-Sask), OCAA (Ontario), RSEQ (Quebec) and ACAA (Atlantic).