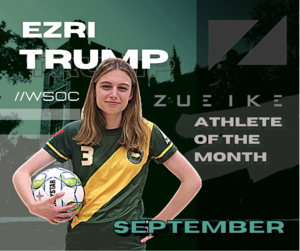 After the team dropped their first two matches by scores of 5-0 and 7-1, and allowed 12 goals against in the process, Trump was dropped from the midfield to the fullback position where she solidified the back line.  Since that tactical switch, the team has allowed only six goals over four matches, and subsequently earned results in two of those competitions.

Defending goal isn't Trump's only skill playing for the Blazers, as the she also showed an offensive touch by netting a goal in CMU's draw with powerhouse St Boniface, which earned the Blazers a crucial point and keeps them in striking distance of third-place Providence going into this week's all-important matchups.

"Ezri has been an absolute rock on our defending line since we moved her there in week two of the season," stated women's soccer co-head coach Cara Isaak.  "We've seen skill and commitment to defending since Ezri started in our program three years ago, and if there's one thing that hasn't changed during the pandemic, it's Ezri's aggressiveness and ability to go to ground to make tough tackles while defending the box."

Co-head coach Lianna Bestvater added "Ezri's speed, agility, and focus on the little things are what make her such a dangerous defender, and we've been lucky enough to see some of that skill on the offensive end as well this season."

Trump's teammate, and last defender, Morgan Pierce, earned MCAC Female Athlete of the Week Honours in week two of the season, and it was in part due to a shored up defence in front of her, led by Trump.  The quality of shots allowed has decreased significantly, which allowed the goalkeeper to make the routine saves and keep the Blazers in close matches with the best of the MCAC.

Ezri Trump and her teammates are back in action tomorrow, beginning a heavy week that sees them at home on Wednesday night and Sunday afternoon at the Ralph Cantafio Soccer Complex, with a road game in Brandon to face the ACC Cougars slotted for Saturday afternoon.  The Blazers find themselves sitting in fourth place in the MCAC standings, and in a playoff position with four points, and have crucial matchups this week against the Providence Pilots on Wednesday, who hold the spot immediately above them in the standings, as well as the Cougars on Saturday, who sit just below them in the table.