The CMU Men's Volleyball program is very pleased to announce the commitment of Albert Francisco for the 2022-23 MCAC season. The local Shaftesbury High product comes to CMU after starting his post-secondary studies at the University of Manitoba. 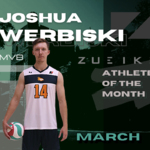 Congratulations to Joshua Werbiski of Men's Volleyball on being selected the CMU Zueike Male Athlete of the Month for March. The second year middle played a huge part in his Blazers' successful MCAC Championship defense, and led the team to represent Manitoba for the first time at the Canadian Collegiate Athletic Association National Championships in Quebec City. For the first time in school history the CMU Blazers will send a team to represent Manitoba and the MCAC at the Canadian Collegiate Athletic Association (CCAA) Nationals, when the men's volleyball squad flies to Quebec City on Wednesday. Not only is this year's men's volleyball team the first CMU team to reach the championship tournament, but also the very first representative of the MCAC in men's volleyball after their historic MCAC Championship win earlier in March.