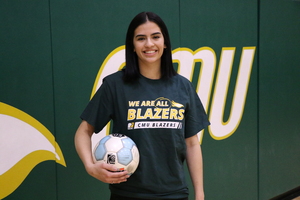 The CMU Women's Soccer program is very pleased to announce the commitment of Louisa Morton for the 2022-23 MCAC season.  Morton is the second Oak Park High product to join Blazers women's soccer this off-season and comes to CMU with a championship pedigree at the club level.

After finishing the Winnipeg High School Indoor League Premiership division playoff round in second place Morton is gearing up for the high school outdoor season with her Oak Park Raiders, provided the snow ever melts off the fields.  Louisa will join her Raiders teammate Juliana Marucci with the Blazers later this year for the MCAC outdoor season which begins in September.  While Marucci will look to backstop the Blazers to another playoff run, Morton will be looking to hold down the midfield and control the centre of the pitch.

On the club side Morton began her career with the St Charles Force for her U15 and U16 years, but later moved to the Charleswood Soccer Club where she has found great success both during the indoor and outdoor seasons.  Her Charleswood club has captured the last four outdoor league championships, from 2017 through to 2021, and Morton featured as indoor team captain during the most recent 2021 season.  She has a clear drive to succeed and excel, which shows in her leadership capabilities and her championship-winning pedigree; something Blazers head coaches Cara Isaak and Lianna Bestvater hope she can bring to their CMU side when training begins for the 2022 season this summer.

While Morton has played both on the backline at centreback as well as in the midfield throughout her high school and club careers, co-head coach Cara Isaak sees her fitting well in the Blazers midfield.  "Louisa is a very powerful player who will make an impact in our midfield," states Isaak.  "She's a smart player who is driven to win, and we're excited to see what she can do at the next level."

Looking ahead to her college career, Morton is very excited to be a part of the CMU Blazers family, and can't wait to hit the pitch for the 2022-23 season with new teammates and peers.  She intends to study Sociology while at CMU, joining many of her women's soccer peers in focusing on the social sciences academically, while pursuing a bright future with the Blazers.

Now in their first full year of Canadian Collegiate Athletics Association (CCAA) participation, the Blazers will look to improve on their MCAC playoff appearance this past October and push for a Manitoba championship when the new season begins in September.  The winner of the MCAC championship goes on to compete at a national level at the CCAA championship tournament. The CCAA is the national body for collegiate athletics in Canada, offering 10 national championships in seven sports. The Manitoba Colleges Athletic Conference joins five other established CCAA conferences; PacWest (BC), ACAC (Alberta-Sask), OCAA (Ontario), RSEQ (Quebec) and ACAA (Atlantic).