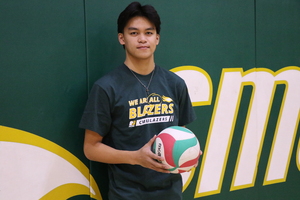 The CMU Men's Volleyball program is very pleased to announce the commitment of Adrian Bernardo for the 2022-23 MCAC season. The Sisler High and 204 Club Volleyball product comes to CMU as a transfer student from the University of Manitoba.

Blazers men's volleyball will add another versatile attacker in Bernardo, who has experience playing in the middle and left side at the high school level, as well as right side and middle throughout his club career.  His ability to play multiple positions should make him an invaluable asset to the team with opportunities to fill in throughout the linuep.

A Sisler graduate, Bernarno was a standout during his time with the Spartans.  In a program not normally known to be a powerhouse at the AAAA level, he led his team to win their division, earning the squad a spot at the MHSAA Volleyball Provincials during his senior year.  Selected as the team's most valuable player throughout his years at Sisler, Bernardo began his high school career as a middle, but made a gradual transition to left side in his final year as he developed his passing skills.  The 6'3" attacker was also named a WSD All-Star both of his varsity seasons.

Bernarno's athleticism and explosiveness at the net was showcased primarily in the middle during his club career, where he played for 204 Cardinal from 2017 to 2019.  He is a versatile player and an ambidextrous hitter, with the capability to hit left-handed, which led him to start his club career on the right side before settling in the middle.  In his final season of club his team won the Best of the West tournament, and placed second at provincials behind the 204 Gold squad.

A rarity in new recruits over the past two years, Bernardo, like his new teammate, Albert Francisco, come to the program having not missed a high school season, and will bring a fully developed and mature game as rookies.  Head coach Don Dulder is elated to have a utility player like Bernardo join the team stating "Adrian is an extremely versatile player who can play middle, right side, and left side.  He has developed his passing game, and comes to the team with a lot of quality experience having played 204 Club ball."  Bernardo's passion for the game has drawn him back into the competitive volleyball scene after two years studying at the University of Manitoba, but those years away haven't affected his drive to succeed at the next level.  "He brings a great deal of knowledge about the game having recently coached at the high school level," continued head coach Dulder.  "We feel he will be an excellent fit for our team and are glad to have him on board."

Bernardo is looking forward to beginning training with the team, noting "I am excited to play for CMU because I think it's a place where I can really thrive as a student athlete.  I'm grateful to coach Don for giving me this opportunity to be able to play volleyball at a post secondary level.  Sport has always been a part of my life as well as my education, and I think being able to play while I study in an environment like CMU will be good for the quality of my learning experience."

This past March CMU became the first ever representatives of Manitoba in men's volleyball at the Canadian Collegiate Athletic Association National Championship, and will look to build on their successes at home to bring their game to the national stage again in 2023.  The 2022-23 MCAC season is set to begin in late October, after the team heads to Columbia Bible College in Abbotsford, BC where they will see PacWest and ACAC competition in late September.