A Conversation with Matheus Aquino 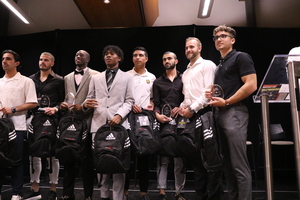 Fresh off his appearance at the MCAC Soccer Championships, second-year striker Matheus Aquino had the bittersweet experience of accepting his All-Conference Award knowing his team would not be moving on to the CCAA Nationals. Unbeknownst to him, his selection as one of the top two vote receivers in the MCAC also granted him the opportunity to be recognized as one of 14 All-Canadians at the National Championship in Langley, British Columbia this week. Before heading out to the West Coast to accept his award in person, Director of Athletics Cara Isaak caught up with Aquino to discuss the season and his road to the National Championships:

The bright sun did little to warm the players, with the temperature hovering around zero degrees on October 16, but it felt like a spotlight as Matheus stepped up to the penalty spot. It was a CCAA Marquee Matchup for a reason and the season was on the line. A goal could send his team to the playoffs. A miss would be unbearable. When the whistle blew to signal the foul, he knew before his coach called out that he would be the one to take it – and he knew what he was going to do – tuck the ball into the bottom left corner of the net with his right foot. He'd done it in practice a million times. But the minutes of discussion that followed the call felt like an eternity. Not surprising – the Cougars had played outstanding soccer for 70 minutes and were poised to take a playoff spot. The frustration was palpable. "It was too much time to think about it. Everyone kept saying 'no pressure' which made it worse. People on the field were praying together and it was a lot of pressure," said Matheus. The ACC keeper made the right choice and dove towards the left post, but the ball sailed just past his outstretched fingertips. "It just gave us a huge boost of energy. But it also calmed everyone down. For the rest of the game, the fullbacks played amazing, stopping their main guys. The centrebacks played unreal – they were first to every ball. And the midfield won every second ball from that. It changed the whole momentum of the game."

Securing a playoff spot was no easy task this year. The parity on the men's side had not been seen in MCAC for years, with teams jousting for playoff positions right up until the last weekend of games. The Blazers team had battled injuries both over the summer and through the season and the young squad leaned heavily on a few veteran players. The team captains got to work early in September to help the rookie-laden group come together on and off the pitch. Matheus hosted a team BBQ at his house, "because a lot of the team didn't know each other well and that stuff happens off the field." Still, it wasn't until mid-season that the team really started feeling like a unit. "We were on a losing streak, and everyone sort of looked at each other and said, 'we need to step it up.' Everyone started pushing each other more to try to get to the level that was expected, and everyone became more comfortable, less scared. We started seeing the difference at the next practice and it was a turning point."

The MCAC coaches had some tough decisions to make when voting for the 2022 All-Conference Team. "Camilo was the top goal scorer and Brandon was the top team through the whole season, so it made sense that he was Player of the Year. He was their best player." With the level of talent among MCAC players reaching new heights each season, the value of these coveted awards has only grown. This year, with the added prize of a potential All-Canadian Award at stake, players had even more motivation to set themselves apart each game. "It must be tough for the coaches to choose. I thought USB should have got more recognition this season, but their team is also very even so it can be hard to pick a standout player."

The All-Canadian Awards weren't the only motivator this year. A trip to the CCAA National Championships gave the teams incentive all season, making each win sweeter and each loss more difficult to swallow. "MCAC has such good players and we deserve to be on the National stage. It just gives us the chance to do more, to be more competitive, and we know we have to get better all the time." While the Blazers will be watching the livestream this year, Matheus has high hopes for future years and still wants the MCAC representatives to do well. "USB winning was not a fluke. You can't get lucky two games in a row, you have to be prepared in order to take the advantage when it comes. I wish it was us, but I have teammates on the team and Seif is a great coach. They aren't selfish players and they play together. I hope they do well."

Although there is disappointment in not be traveling as a team to the National Championship, Matheus still got to fly to Vancouver, British Columbia and make the short drive to Langley to accept his All-Canadian Award. "I was speechless when I found out. And surprised. I didn't really make the connection between the MCAC awards and the All-Canadian Awards. I just didn't think too much about the awards during the season," said the sophomore Blazer. He was quick to credit his teammates for their role in his success. "Zach has been a great leader, he talks the whole game. Noah and Gode lead by example and they're vocal. Stan is the motivator and the engine of the team. He helps everyone push more when they're tired." Having teammates that you can rely on makes all the difference both on the field and in the classroom. Demands on student-athletes' time are high and balancing sports and school can be very difficult. "You need to find people in your program who will push you and keep you focused. Stan and I study together and balancing it all got easier this year," explained the second-year business student.

Matheus also thanks his coach for much of his success over the past two season. "Anderson changed my life. It all started with Ando – he gave me the opportunity to play on his top division men's team and he was always there coaching me and being a friend. When I was thinking about going back to Brazil after my first year studying here, he invited me to CMU. He's more than a coach."  In his fourth year at the helm, Anderson has been described this way by many players. "He is genuinely invested in all of us. He goes above and beyond for us all, not just me. He tries to connect with everyone," said Matheus.

Elite athletes know that you need to capitalize on each opportunity that comes your way. "I thank God for opportunities in soccer, but in the end, it comes from wanting to push yourself." His conference, school, coaches, family, and teammates have all helped open doors along the way, and Matheus has put in the effort to make the most of each chance given. "I'm just grateful."

Now back in Manitoba, Aquino and his teammates will begin training for the indoor futsal season, which if anything like the outdoor season, will prove to be as competitive as it ever has been.  The season runs through four qualifying tournament weekends throughout January and February, followed by the MCAC Futsal Championship February 18-19 hosted by CMU where it all began.