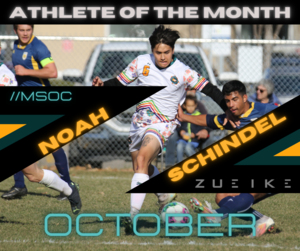 Congratulations to Noah Schindel of Men's Soccer on being selected the CMU Zueike Male Athlete of the Month for October. The rookie defender has been a fixture at the Blazers backline throughout the season, and the league has noticed.

A summer signing of Blazers Men's Soccer head coach Anderson Pereira, Schindel came to CMU with a maturity that most rookie athletes don't possess, owing to the gap years he took between high school and post-secondary education.  He was named the Folio Cafe player of the game early in the season, and was deserving of the award on several other occasions throughout the second half when the Blazers had to chase down the Assiniboine Cougars for a spot in last weekend's MCAC Championships.  Perhaps the pivotal moment in the season was during a beautiful October afternoon when the Blazers hosted the Cougars at the Ralph Cantafio Soccer Complex.  Having tied in their previous match in the season, the Blazers needed points in the contest to keep pace with ACC and give themselves a chance at sneaking into the playoff picture.  After two goals from CMU's Matheus Aquino put the Blazers ahead, the Cougars managed to fight back and press to go ahead late in the game.  However, a final push by the green and gold produced a glorious top-shelf tally from outside the box off of the boot of Schindel, and kept the Blazers' season alive.  The Blazers would go on to beat ACC on their home turf, and leapfrog them into the MCAC Championships semi-finals.

Both Aquino and Schindel were named MCAC All-Conference selections going into the playoffs, and Schindel's solid play continued into their semi-final matchup with the top-seeded Brandon Bobcats.  Despite a heroic defensive effort, Schindel and the rest of the Blazers back line couldn't keep the Brandon side off the scoresheet, and the team eventually fell 0-2 at the final whistle.  Schindel was named Player of the Game for his part in shutting down the league's top goalscorer on the opposing squad.

With the outdoor season now over, Blazers Athletics was able to catch up with head coach Anderson Pereira to get his thoughts on his standout rookie.  "Noah has been outstanding this season; this past month he scored a very important goal for us and produced some amazing defensive performances.  His quality not only on the ball but to read the play and anticipate the opponent's next move is incredible.  He is also a very strong and fast defender that can keep up with anyone in the league.  Noah works hard during training sessions and tries to improve everyday while also pushing his teammates to do the same, which has made him a leader in the back, and we only see him getting better and better in the seasons to come.  We couldn't be happier with how he played this season and we are looking forward to seeing more improvement going forward."

Before next outdoor season comes around the Blazers will challenge for the MCAC futsal championship, which will return to where it all began with finals held at the Loewen Athletic Centre in late February.  The Blazers will resume training later this month indoors to ready themselves for qualifying tournaments at the other conference schools in January and early February.