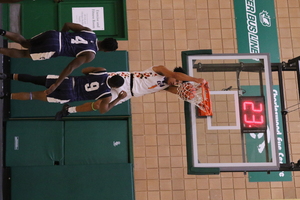 CMU's Isaiah Cole throws it down over the visiting Providence Pilots

The home opening games did not disappoint, as CMU's women's squad tipped off the season with a decisive 76-31 win over the visiting Providence Pilots.  Rookie guard Aira Abello led the Blazers on the scoresheet with 17 points, including nine from beyond the arc.

On the men's side, the Blazers took their first win of the year, downing the Pilots 74-64 in an excellent complete game effort.  Veteran shooting guard Seth McKenzie dropped 22 points in the win and started the MCAC season on the right foot.  Veterans Isaiah Cole and Binh Nguyen also factored heavily on the scoresheet in the win.

Meanwhile, in the Southern Manitoba town of Niverville, the Blazers volleyball teams participated in Providence University College's home openers at their new home for court sports.  In front of a raucous Pilot supportive crowd, CMU's women's team managed to spoil the party, capturing a 3-1 win; their first of the season.

The men's game featured a rematch of the 2020 MCAC final, in which the Blazers stormed back from a two set deficit to take the Championship match in a five-set thriller.  CMU put their offence in the hands of second-year setter Cameron Chan once again, this time with the crowd decidedly behind the opposition.  The Pilots avenged their 2020 result with a tight four set win.  Some bright spots for the Blazers were second-year left side Cam Gayleard who attacked for over 50% kill efficiency, as well as rookie Felix Stetefeld, who gave the green and gold a much-needed spark in the third set.

On Saturday Blazers volleyball were back in Niverville for a rare back-to-back away weekend facing the same Providence Pilots.  After a rocky start, CMU's women's squad turned things around to take a decisive third set win and kept things rolling in the fourth, taking the match the full distance.  Alas, another win wasn't in the cards for the Blazers as they headed home 1-1 on the weekend.

The men's game followed and despite some tactical adjustments taken from the previous night, the Blazers men never found a rhythm and were on the back foot for most of the night.  The 0-3 loss was not indicative of the play, as a closer look at the set scores (25-23, 28-26, 25-21) show a very tight match that could have gone much differently.

Inside the city limits at Universite de Saint-Boniface, the Blazers basketball teams met Les Rouges for their first games of the MCAC season after joining the league in basketball.  The CMU women gave Les Rouges a rude welcome back to the league with an eye-opening 100-10 win.  Rookie Maizy Lawson was the high scorer for the Blazes with 30 points and 12 rebounds on the night.

The men's game was a bit more competitive, but the Blazers managed to stay perfect in league play thus far, with a 78-60 victory.  CMU's top offensive threat in the game was rookie forward Ezra Leano, who notched 15 points and 9 rebounds in the game.

Both the basketball and volleyball teams will enjoy a change of competition this coming week, as the hoopsters jet off to Ontario for exhibitions with Hamilton-region CCAA schools Redeemer Royals, Niagara Knights, and Mohawk Mountaineers.  The volleyball teams will have their first look at the Assiniboine Cougars who come to town for a single Saturday matinee game at the Loewen.