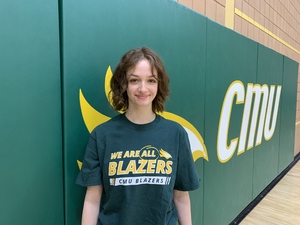 The CMU Women's Soccer program is very pleased to announce the commitment of Amelie Hasker for the 2022-23 MCAC season.  The College Louis-Riel product comes to CMU with a passion and leadership potential that will serve to boost the Blazers this coming season.

The Louis-Riel Voyageur was finally able to suit up for her high school club this spring after a couple seasons lost to COVID, and the team finished their season ranked fifth in the SCAC division with a 2-2 record.  After a slow start to the spring taking losses to the Westgate Wings and the Beliveau Barracudas, Hasker and her Voyageurs finished strong, taking wins off of the Windsor Park Royals and the Saint-John's-Ravenscourt Eagles on back-to-back days to finish out the season on a high note.

Hasker has played club soccer locally, most recently with Bonivital, Corydon, and Winakwa.  She appeared in the Boston Pizza Players Tournament Finals as well as league finals with that Winakwa squad in 2019.  The 5'4" defender has been playing as a keeper sincer her U12 season.  Hasker's leadership and field vision from the back line will still be a huge asset for the team as they look to lock down the back end of the pitch in the coming season.

The newest women's soccer signing got linked to CMU through an old MCAC connection in former Red River College head coach Doug Lawrie, who was coaching Hasker at Hornets SC in the Winnipeg Women's Soccer League.  The former Rebels skipper suggested CMU as a good option, and the Blazers co-head coaches Cara Isaak and Lianna Bestvater couldn't be happier that Lawrie sent her their way.  "Amelie will be a great addition to our squad," notes Isaak, "we've been really impressed with her leadership on her team and how she can be a commanding voice at the back.  She has a good understanding of the game and is very vocal and positive on the field.  I'm looking forward to seeing her make the jump to the MCAC."  Hasker has taken part in training sessions with the Blazers already and has looked to fit in well with the team already, which has caught the attention of Bestvater, who states "she just seemed very at home at training sessions almost immediately."

Looking ahead to her college career, Hasker is very excited to be a part of the CMU Blazers family, and can't wait to hit the pitch for the 2022-23 season with new teammates and peers.  Taking her game to the next level and raising the bar for herself personally will be her aim for the upcoming year, which will hopefully lead to plenty of success for the Blazers on the field.

Following their first full year of Canadian Collegiate Athletics Association (CCAA) participation, the Blazers will look to improve on their MCAC playoff appearance this past October and push for a Manitoba championship when the new season begins in September.  The winner of the MCAC championship goes on to compete at a national level at the CCAA championship tournament, which will be hosted by the RSEQ in Quebec this coming November. The CCAA is the national body for collegiate athletics in Canada, offering 10 national championships in seven sports. The Manitoba Colleges Athletic Conference joins five other established CCAA conferences; PacWest (BC), ACAC (Alberta-Sask), OCAA (Ontario), RSEQ (Quebec) and ACAA (Atlantic).