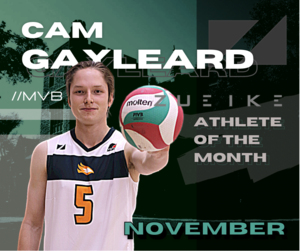 After a breakout rookie season in 2019-20 when he helped the Blazers to their MCAC Championship win as a first-year starter, Cam Gayleard has shown no sign of a sophomore slump.  Now in his second year of eligibility, but third year with the team after the cancelled 2020-21 season, Gayleard leads a rookie-heavy squad as the backbone of the Blazers' attack.  Now with a 5-3 record on the season, enough to place CMU second in the standings, Gayleard looks to lead the Blazers into a huge matchup with the first place Providence Pilots before heading into the Christmas break.

Perhaps his most notable performance of the season so far happened this past weekend in Brandon, when the Blazers looked to take their first road wins of the season off of the Assiniboine Community College Cougars.  While his teammates struggled to find the offensive output needed to win the game, Gayleard picked his team up and shouldered a heavy load, accounting for 14 kills and an incredible 0.458 kill efficiency in the Blazers' five-set victory.  Defensively he was a force as well, starting with a team-leading 2.70 serve receive average, and added to that two digs and three blocks.  Gayleard also led the team with four aces in the match, and added another four the following afternoon in the Blazers' four-set win over the same Cougars.

Often relied upon to keep the team steady as lineups change around him, Gayleard has played every set so far during this MCAC season and has earned his spot as the team's "franchise player" through hard work day-in and day-out.  "As one of our three captains, Cam has demonstrated his leadership both on and off the court," notes head coach Don Dulder about his all-star calibre left side.  "He is an excellent passer and our put away player on offence, but probably his biggest improvement this season has been his serving.  He has worked very hard to improve this aspect of his game and it is definitely paying dividends, both in aces, but also in keeping the opposition's offence on the back foot.  He is always one of the first players at practice and last to leave, working with an attention to detail that is commendable, and has a strong desire to improve and work hard to raise the level of his game."

Cam Gayleard and his Blazer teammates will be back in action this Friday for their final match of the first half as they host the Providence Pilots in a top-of-the-standings showdown at the Loewen.  The second half of the season starts up on January 14th when the Cougars come to town, who will be the hosts at this year's MCAC Championships later in February.  This year's MCAC Champion will have the opportunity to head to CCAA Nationals, hosted by CEGEP Limoilou held in Quebec City in March.