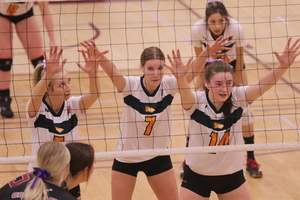 Friday night was a big night for Blazers Athletics as the women's volleyball team played their first match of the season at the site of the 2022 MCAC Volleyball Championships.  Their matchup was with a struggling Cougars squad, who had yet to win a set through six games played going into the match.  The Blazers had no plans to be the first team to drop a set to ACC and rolled to a straight-sets victory 25-14, 25-18, 25-17, looking like a team bent on holding their second place spot in the Manitoba conference rankings.  Head Coach Jayme Menzies utilized a number of her players in the win, but got the biggest contributions from rookie left sides Rachel Bartel and Halle Meisner, as well as rookie middle Annika Kornelsen, who displayed her athleticism on a number of offensive sequences, running steps and then finishing the rally with a block.

The storyline for Blazers men's volleyball heading into the Friday night showdown with third-place Assiniboine Cougars was the disparity in their record; a perfect 3-0 at home, but a dismal 0-3 in road games on the season.  With the offence in the hands of setter Cameron Chan, the Blazers went to work aiming to right that record and take their first away win.  Though the offence sputtered at times against the big ACC block, second-year left side Cam Gayleard put the team on his back, leading the team with 14 kills for a.458 kill efficiency, as well as passed a phenomenal 2.70 on serve receive, and on the other side of the ball added four aces himself, also a team high stat.  When the dust settled, the Blazers came out on the right end of the scoreline with a gritty 3-2 victory (22-25, 25-19, 25-18, 15-25, 15-11).

With the quick turnover to Saturday's matinee games, both Blazer volleyball teams showed their depth by fielding different lineups for the back half of the weekend series.  On the women's side rookie setter Paige Wright once again split the sets with veteran Renee Desroches, while Elizabeth Jaterka saw action on the Blazers left side, with a rotating trio of middles that included Chloe Friesen, Sahra McKenzie, and Brooklyn De Jong.  After a first set blowout by the Blazers, the Cougars clawed back, but were eventually denied their first set win of the season once again in extra points.  CMU regrouped after the brief scare and took the match in three sets once again, 25-12, 26-24, 25-16.

Like the women's team, the men's volleyball squad fielded a different lineup for Saturday's matchup, swapping in Tim Juvonen to run the offence, with Duncan Petrie on the right side, David Nelson in on left side and the tandem of Felix Stetefeld and Josh Werbiski starting in the middle.  The Blazers managed to continue some of their momentum from the night before taking the first two sets in a quick start.  A hiccup in the third set led to the neccesity of a fourth set, which ended up being a quick and painless end for the Cougars as the CMU men went on to take the match 25-18, 25-21, 22-25, 25-16.

The Blazers basketball squads started their weekend out in Niverville as they met the Providence Pilots for the first time on their new home court.  Facing the second-place Pilots gave the Blazers women's basketball team a chance to let their stars shine, and that they did, with fourth-year Shirliz Apiyo leading the charge with an 18-point effort, followed closely by fellow fourth-year Julia Schatkowsky who drained 17 of her own.  Both were working hard on the defensive end with Apiyo grabbing 10 rebounds and nine assists, with Schatkowsky adding 14 rebounds in the game.  Rookie Briana Ehrmantraut rounded out the top three scorers with 15 points of her own.  For the first time this season, the Blazers were down at the half and had to pull up clutch down the stretch to avoid their first conference loss of the season.  Despite the half-time defecit, at the final horn the Blazers ended up on top with an 80-54 win.

Blazers men's basketball entered their contest with a perfect 5-0 record on the line in league play, facing the 2-2 Pilots who were defending home court.  Like the women, returning stars led the charge with guard Isaiah Cole topping all scorers with 34 points and 14 rebounds for a huge double-double.  Rookie forward Ezra Leano added 17 points and eight rebounds, and veteran shooting guard Seth McKenzie drained 16 points of his own with five rebounds alongside.  The game was tight throughout, but at the end of the night the Blazers headed home happy with an 81-73 win.

Saturday's women's basketball rematch saw more dazzling play from veteran guard Shirliz Apiyo, who put the team on her back and willed them to a 77-62 win on 21 points, six rebounds, and nine assists.  Briana Ehrmantraut and Julia Schatkowsky once again factored in the top game scorers, additing 15 points and 14 points, respectively.  When the buzzer sounded the Blazers' record moved to a perfect 6-0 with one game remaining in the first half schedule.

Blazers men's basketball returned to Niverville on Saturday night looking to stymie the Providence offence once again.  This time around it was Seth McKenzie leading the offensive charge, dropping 25 points and adding seven rebounds.  Isaiah Cole factored in huge again, adding 23 points and 14 rebounds for a double-double, and Ezra Leano rounded out the Blazers' top three statistically again with 11 points, seven rebounds, and four steals.  Those three players ended up outscoring the entire Providence offence, with the score at the end of the night being 80-56 in favour of the Blazers.

With four wins both on Friday and Saturday, the Blazers finished up the weekend a perfect 8-0 and all in great position in the MCAC standings at the end of week 12.  Both teams finish up the first half schedule with home matches against the Providence Pilots; Blazers volleyball is in action on Friday night at the Loewen, while Blazers basketball tipoff for the last time for the first half on Saturday night.