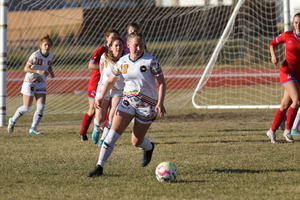 The Blazer men kicked off the day's games playing the top-ranked Brandon Bobcats on their home field, a game that had originally been scheduled on neutral turf at the Brandon Sportsplex, where ACC was supposed to be hosting the first versus fourth seed games.  The Bobcats took full advantage of their familiar field, launching an early counter-attack resulting in a goal which sent the Blazers reeling and chasing the remainder of the game.  Clearly both sides had not forgotten their hotly contested clash last weekend when both goalkeeper Zach Bartel, and defender Matthew Pahl were sent off with red cards.  Bartel was back in the Blazers' net after serving his one-game suspension, while Pahl was given a two-game suspension for his in-game altercation, which carried over into the semi-final.
Overall, the Blazers defended quite well after their early blunder, with MCAC All-Conference selection Noah Schindel working his magic at the back, and captain Matheus Aquino, also an MCAC All-Conference award-winner, leading the attack.  However, CMU was up against the conference leader in goals in Brandon's Camilo Rodriguez, and it was apparent that his level of talent and recognition afforded him additional leniency with the officials, who tallied seven fouls for the attacking forward, but refused to pull out the cards for the home side.  Several great chances off of set plays by the Bobcats in the second half came up empty, due to solid play by graduates Zach Bartel in goal and defender Gode Katembo, who was heroic in his challenges against Rodriguez.  Nevertheless, the referees awarded a penalty to the home side on a seemingly harmless bit of defending by the Blazers, which resulted in the Bobcats' second goal and the back-breaker for the CMU side.  Noah Schindel was named as CMU's player of the match for his fantastic defensive effort on the day.

Prior to kickoff in the women's semi, all Blazer award-winners were recognized for their accomplishments, including Gode Katembo of men's soccer and Rena Neufeld of women's soccer as members of the MCAC True Sport Team, while All-Conference selections Matheus Aquino, Noah Schindel, Tiegan Kroeker, and Ayesha Umar all received their hardware as well.

By all accounts, the fourth-seeded Blazer women had a tough hill to climb ahead of them facing the defending champions St Boniface Rouges who had only one blemish on their record during the regular season.  Les Rouges came out fast and strong before CMU were able to settle in, scoring four times in the first half with the wind at their backs.  Following the half-time break, the Blazers were able to buckle down defensively and produced a few fantastic scoring chances of their own off of some great through balls by captain Tiegan Kroeker coupled with runs from striker Chloe Boulet.  Every graduating player on the women's squad featured in the match, with Tiegan Kroeker playing the full match, as well as Melissa Gilbert and Rena Neufeld in the lineup as starters, and Lindsey Knodel coming in during the second half.  The Blazers equalled the powerful St Boniface side in the second half, and played to a 4-0 loss at the final whistlef, ending their outdoor season.  Tiegan Kroeker was named as the Blazers' player of the match in her final outdoor game with CMU.

The Men's Championship Final saw the top-seeded Bobcats facing the surging St Boniface Rouges, who upset Providence in their semi-final on Saturday.  When the dust settled, Les Rouges ended Brandon's title defence, earning them the MCAC Championship and a berth at CCAA Nationals held this year in Vancouver.

On the women's side, the St Boniface Rouges continued their dominance, defeating Providence and earning them a spot at CCAA Nationals in Montreal in a little under two weeks' time.  Former Blazer and current Rouge Marijka Yaschyshyn was on the winning squad and was recognized as Championship MVP.  We wish her all the best as the team represents Manitoba at CCAA Nationals.

Both teams will now take a short break before resuming training indoors later in November ahead of the futsal season, which kicks off after the Christmas break.  The MCAC Futsal Championships return to where it all began right here at CMU in late February after four tournament weekends held at the other MCAC schools.