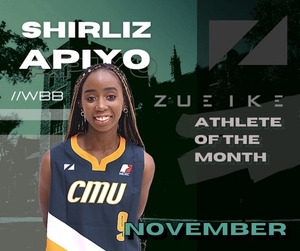 In addition to this CMU Athlete of the Month honour, Apiyo was also named MCAC Week 12 Female Athlete of the Week, which stemmed out of her dominant play over rival Providence Pilots this past weekend.  Heading to the Pilots' new home digs, the Blazers kept the strangle hold on first place in the conference and in the process kept their perfect 6-0 conference record alive, largely due to the play of the veteran guard.

Apiyo led the team in scoring both nights, draining 18 points, to go alongside 10 rebounds, 11 assists, and an incredible nine steals to leave her just one steal short of an unheard of quadruple-double statline.  The Blazers leaned on their star guard to overcome a first half deficit and lift the team to a 80-54 win.  The following night Apiyo was at it again, totalling 21 points, six rebounds, and nine assists as she led the Blazers in all categories and once again helped the team top the Pilots in conference play.

Earlier in the month Blazers basketball jetted off to the Hamilton region for CCAA exhibitions with the Redeemer University Royals, Niagara College Knights, and Mohawk College Mountaineers.  The stiff competition meant Apiyo's leadership and skills were called upon heavily to guide the team, who came home with a 2-1 record on the trip.  She averaged 15 points and eight assists over the three exhibitions, which included a 88-72 win over the Royals, a 74-49 demolition of the Mountaineers, and an extremely close 65-69 overtime loss to the Knights.  It was in that nail-biter contest that Apiyo shone brightest, dropping 25 points and ten assists for the big double-double.

"Shirliz has been on another level this season," stated head coach Joe DiCurzio about his fourth-year star guard.  "It was a struggle to keep the women pushing and improving over the last cancelled season, but Shirliz clearly put in the work and has come into the year eager to play in meaningful games.  She has been a big part of our offence since she started with the program, but has managed to find ways to keep growing her game and leading the team on offence, while at the same time improving on the other side of the ball.  Her near quadruple-double on Friday night is nearly unheard of at this level, where teams aren't scoring 100 points every game.  To be able to rack up that many points, assists, rebounds, and steals in a single contest is phenomenal, and comes out of the hard work she has put in on and off the court."

With the withdrawal of CMU and Providence this season from the primarily American-based Northern Intercollegiate Athletic Conference (NIAC), the Blazers are playing for pride at home for the remainder of the year in MCAC play.  They finish up their first half schedule with another date with Providence at home on Saturday night before breaking for the holidays.  The MCAC Championships will be hosted by Providence in Niverville in mid-February where the Blazers will look to defend their title.