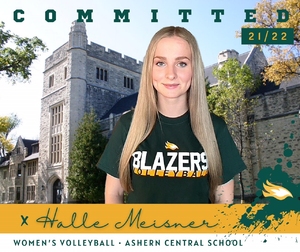 Like all Manitoba High School athletes this past year, Meisner had her last season of varsity volleyball taken away, but still has three years of varsity experience to draw upon when moving to the university level this fall. Throughout her time in high school Meisner was given the opportunity to train and play in the starting lineup with the varsity team, including during her seasons as a grade nine and ten student while still playing with the junior varsity squad. Playing on multiple teams during the year also gave her the opportunity to fill many roles, learning a versatility that would see her play in the middle and occasionally at setter when not asked to fill her usual spot on the left side.

Meisner helped her Ashern Cobras varsity team to a finals appearance at regionals in her grade nine season, earning them a berth at Provincials, and a wealth of competitive experience in the process. In her grade eleven season the team won a tournament in Rivers, which also saw Halle earn tournament MVP for her part in the win.

On the club side, Meisner started her career with Dynamo 16U, which was her only season that didn't get cut short due to the COVID-19 pandemic. The team was very successful, medalling in each tournament that they competed at leading into the Provincial Championships, where they finished fourth. Her play at club provincials earned her an all-star honour and she followed that performance by leading Dynamo into the Volleyball Canada Club Nationals where the squad earned a silver medal in Division 2. Meisner trained with Jr Rebels for the shortened 17U season in 2020, and most recently trained with Cobras at the 18U level, though was once again not able to play in a compettive season with the club.

After missing so much time on the court over the past two years, Meisner is beyond excited to compete in the MCAC and CCAA, and is looking forward to continuing her career in volleyball with her new teammates under the direction of coach Menzies. The feeling is mutual for Menzies, who notes "I am excited to welcome Halle as the final addition to our strong recruiting class. Her power and instincts on the court are rounded out by other critical intangibles such as work ethic, coachability, and an intrinsic desire to excel." The addition of Meisner rounds out the lineup for Menzies and the rest of the Blazers women's volleyball team, who are looking to defend their title as MCAC Champions.