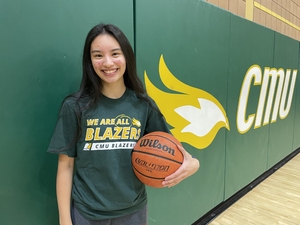 The CMU Women's Basketball program is very pleased to announce the commitment of combo guard Madeline Wynne for the 2022-23 MCAC and NIAC seasons. The Daniel McIntyre product comes to CMU hoping to make her mark in the Blazers' lineup this year.

Wynne will trade in her DMCI maroon for the Blazers' green and gold this upcoming season, but her high school career has given her plenty of success already, with her Maroons squad having been named champions of their Winnipeg conference, and entered the 2022 AAAA Provincial championships as the second seed in the tournament.  In her COVID-shortened grade 10 junior varsity season Wynne was named a conference all-star, and  was recognized again this season as a provincial graduating all-star.

Former Blazer and her Daniel McIntyre Collegiate coach, Wyatt Anders, has nothing but positive things to say about the newest Blazer, stating "most people notice the strong playmaking and shooting abilities of Maddie, who is an athletic combo guard.  However, her teammates and coaches notice what she brings off the court: dedication, a caring attitude, and studious mentality.  Maddie is a great kid and CMU earned a great addition to their roster."

On the club side, Wynne started her career with Winnipeg Wildcats Basketball Club where she played from 2014-2018, then moved to Attack Basketball for the 2019-20 season just ahead of the pandemic, and finished off her club eligibilty with Manitoba Magic this past season.  The 5'6" point guard developed her ball handling skills running offence throughout her club experience.

The Wynne family is no stranger to high-level sports, with Madeline's mother, Beverley Wynne, a regular at the National Hockey League's Winnipeg Jets games as an anthem singer.  While performing in front of 15,000 fans might be a different sort of pressure situation than college sports, Maddie is excited about getting her game to the next level in the MCAC and NIAC while studying at home in Winnipeg.  "CMU seems like such a great environment to further my academics and continue to play basketball at the next level," added Wynne.  "All the people that I have met already seem so great.  I am so excited to get working towards a great season.

Blazers women's basketball head coach Joe DiCurzio is excited about his newest addition and has plenty to say about Wynne, noting "we are elated to have Madeline join the Blazers.  We pride ourselves of playing an up-tempo style of play and Madeline fits perfectly in that role.  She will be able to push the ball up the court very quickly and with her great abilities to hit the three pointer, attack the basket and find the open player she will be a very welcome addition to the Blazers.  Her very tenacious defense along with her incredible quickness will allow us to really pressure teams full court.  We are really looking forward to having Madeline be a key contributor for the Blazers."

After winning their fourth consecutive MCAC Basketball Championship, Wynne and her new Blazer teammates will look to defend their provincial title again for the upcoming 2022-23 MCAC season.  With border crossing regulations and restrictions to the states set to loosen, CMU is poised to rejoin the NIAC conference next season in a condensed format with matchups against the other private colleges in the league that includes teams from Minnesota as well as North and South Dakota before a championship tournament to cap off the year.  The Blazers captured their first ever NIAC title in 2020, their most recent season in the conference prior to the COVID-19 border closures that quashed the team's chances of defending their title when basketball returned to play this past season.