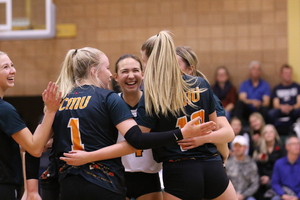 After a successful opening weekend to the 2022-23 MCAC volleyball season with both teams earning wins over the Assiniboine Community College Cougars, this past weekend saw the conference schedule begin in earnest with a home-and-home series with the Providence Pilots.

Friday's showdown in Niverville was the home opener for the Providence Pilots, and CMU's men's side did everything in their power to ruin the party.  The best-on-best matchup started smoothly for the Blazers who cruised to a 25-17 first set victory.  A stumble in the the second set saw Providence regain some momentum, but a marathon 29-27 set win for the Blazers in their road whites proved to be the back-breaker for the Pilots, as the visitors got out to an early lead in the fourth set and sailed to the four set victory.  Second-year right side Duncan Petrie led all Blazers with 15 kills along with some huge serving runs, while left side Cam Gayleard added 14 of his own in the win.  The story of the game was perhaps the passing of the Blazers squad, allowing setter Tim Juvonen to spread the offence and keep the Pilots on their heels.  Left side-turned-libero Brock Carmichael was named player of the match for CMU, notching 14 digs and solid serve-receive numbers throughout the match.

Niverville has always proven a tough gym to play in for visitors, and the CMU women's team experienced the hostile home crowd to it's fullest effect, dropping their match to the Pilots in straight sets.  The match was not without its merits however; as the Blazers played to very tight scores throughout the game, including an extra points loss in the final set of the night, showing that the CMU side had what it takes to take down the Pilots.  As in the men's match, CMU's libero was named player of the match, with Lauren Ens taking home the honours on the night.

Saturday's rematches were a stark contrast to Friday's games in most respects.  With the Blazer men briefly sitting atop the MCAC standings at 2-0, the opportunity was there to put the league on notice and stay perfect with a home crowd behind them.  The Blazers lineup looked very different from Friday night, with setter Tim Juvonen, right side Duncan Petrie, and libero Brock Carmichael resting for the match.  While the young squad showed small flashes of brilliance, Providence used their weapons in the middle effectively to get kills and hold the Blazers' blocks to provide better matchups on the outsides on a consistent basis.  A sub-par serve-receive passing game created tough situations for setter David Nelson to spread the offence on the Blazers' end, though some fantastic defensive play by Luke Janzen at libero kept several rallies alive.  In the end it simply wasn't enough, with the Blazers falling in straight sets, 18-25, 19-25, 18-25.

The women's game was a different story altogether, with Blazers head coach Jayme Menzies going with a number of her powerhouse attackers in an effort to get the crowd behind them early, a tactic that seemed to work very well for them, allowing the team to roll to a 3-0 victory.  Menzies' lineup included last year's Blazers Female Rookie of the Year Rachel Bartel in tandem with rookie sensation Layla Reichert on the left side, who contributed some highlight-reel smashes in the win.  First-year right side Julia Sawatzky provided a consistent attack from the opposite side, while the duo in the middle of Brooklyn De Jong and Sahra McKenzie rounded out the attackers for the Blazers.  The Folio Player of the Game award went to Reichert for her numerous kills and timely digs in the backcourt.

Both teams now prepare for next weekend's series with the St Boniface Rouges and hold 2-1 records on the season.  With ACC's sweep of Les Rouges on the men's side, CMU, the Pilots, and the Cougars all sit tied in first, with Les Rouges still winless on the season.  Don't expect this weekend's matches to be a cake-walk however, as Les Rouges have taken a set off of their opponents in each of their three games thus far.
On the women's side, CMU's split with Providence pushes the Pilots below them in the standings down to third place, with the defending champions Les Rouges atop the MCAC table with a perfect record so far, and ACC holding fourth spot.